Yup, there was a football game tonight. Saskatchewan vs Hamilton. Saskatchewan won...45 to 15, I believe the final score was, but don't quote me. It was a pretty sweet game. The roughriders made some beautiful runs. So that was really fun to watch.
My uncle came to visit us today. Which was nice, especially since I had no idea he was coming. My dad did, except he thought he was coming tomorrow instead of today. Anyways. It was fun. I showed him the pictures of the band from the anniversary party, and then he brought his laptop and showed us the pictures he took. I know there's at least two of me with my sax that we want him to e-mail us...and there's also a really adorable one of my dog in there, that I really want.
Umm...I also made a banana/mango smoothie, which was really good...
And I talked on the phone for a while, which was really fun, and made me happy...=)
But other then that nothing really happened today. Oh, I finished another bracelet, I suppose you want a picture of that. 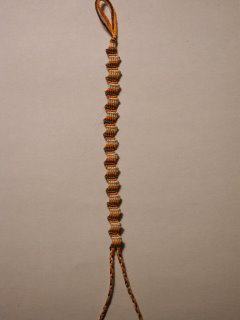 I told you the colours were kinda odd.
I also started a new one. Not zig-zag, made with gold/yellow, grey/blue, and black. It actually looks kinda neat.
As said by Calminaiel at approx. 11:59 PM