I swear, being sick just goes right to my head and I can't concentrate on anything. I couldn't even write a melody in theory today. I got the first 5 notes (or rather, he gave us the first 3, and I made the next 2) and suddenly I just blanked out and had no clue where to go from there. In math I have expected myself to start drooling, and I totally didn't follow him when he did some revision about circles. Social was slightly better, mostly because I have Nicole, Randall, and my iPod, plus the fact that I never really understand what's going on in social anyways. English was mostly the same as math. I sat there and couldn't make myself concentrate on stories. It's pretty much the same right now. I've spent the last half hour thinking about getting homework done, yet I haven't done anything, since I know I'll just pull it out and stare at it. I'm thinking the best option right now is just to go to bed. I might (hopefully) wake up feeling better. I can't afford to be sick, I was going to use exam weeks to practice like I've never practiced before. And make a bunch of reeds.

Yeah, I really need sleep. Although I'd like it if I could actually breathe through my nose, but I guess you can't ask for everything in life.

Oh yeah, Kelskie wanted Spain stories. I wrote a little blurb about our drive through Portugal, but that wasn't really the type of thing other people would want to read, I think. I just kinda wrote down random thoughts, and handed it in for English as a writer's workshop thing.

So, I got some pictures from Spain, but since I'm sick, and therefore lazy and unable to think, I'll just do one that really has very little to do with Spain...but I like the picture. 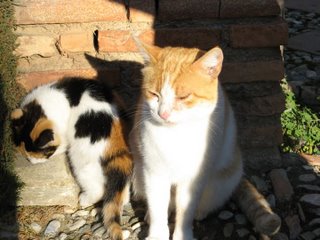 This is in Granada, at the Alhombra. There were a bunch of wild kitties running around, and they were all very adorable. I wanted to take that little one home. Customs wouldn't have noticed him, would they? He's tiny enough...

Awww, get well soon! That's a drag, I can't get stuff doen when I'm sick either...hope it goes away!