That seems to be what I do best. I really do want to get some english done tonight, especially as I feel like I'll be able to concentrate. Might as well take advantage of that. Hopefully I'll be able to get at least two stories done tonight. Maybe three if I can. Well, actually I want to get as much done as I can, without staying up until three in the morning.

I feel better today. I think sleep helped. My nose is still against me, but my throat seems slightly better. Taking lots of Vitamin C, although I wished we had better flavors. Right now we have grapefruit and some other tropical thing. Once we got strawberry kiwi, which was so good. I don't mind orange. Alicia had raspberry in Spain, which I also liked.

I actually packed a lunch today. I should do that more often, it's nice to eat lunch. It just consisted of a couple cookies, a banana, and a juice box, but it was still good. And simple.

Hm...I have to talk to Randall about the social essay...I'm not looking forward to that essay. Although I did just talk to my dad and he helped me come up with two fairly good points. We got a third one too, but it's not very strong. Hm...so much for getting a lot of english done, I've just spent a bunch of time on this social.

Alright, time for a Spain story. 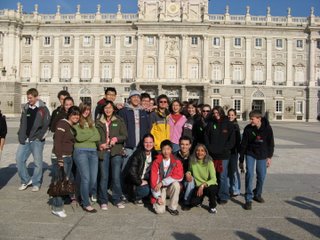 This is us in Madrid, the first city we were in. We had a tour of the Palace there, and this is us in the sort of courtyard - like area of the palace.

And, of course, that picture leads us to introductions. So, I'm about third from the right, in my band hoodie (you can see the orange Abe logo in the corner), and I'm trying to sheild my eyes from the sun, since I squint really easily in the sun. Christine's right beside me, with her sunglasses, and half in my shadow (sorry Christine. =)...). Liz is beside Christine, looking beautiful, as she always does. Tiger's in front of Liz. James is totally in Liz's shadow, if you can pick him out. Colin's the weird guy on the far right. =) Just kidding. Colin's funny. Joanna's on the far left. She knew Spanish, and kinda helped us get through some of our town trips. Alicia's leaning against Joanna, and Jasmine's beside Alicia. Jasmine's brother (who I just found out was her brother during the trip) is behind Jasmine. Bill's the guy in the red coat...pretty much front and centre. He got his cleaning rag stuck in his clarinet, but I'll tell that story another time. Eve's beside Liz, in the pink jacket, with her viola boyfriend. John's beside Bill. Oh yeah, and Jer's beside Tiger.

So...I think that's just about everybody I know in that picture. Everybody I can make out, anyways. So, now when you're in doubt, you can refer to this picture. =)

Anyways, the palace was really neat. The ceiling's were so neat, they were pretty much the first thing's you looked at when you walked into the room. 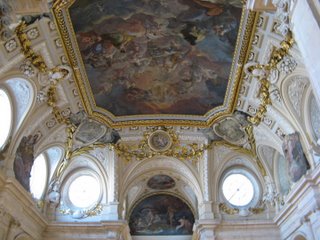 There were also chadaliers in every room, which were neat. Some of them were made of silver/metal rather then completely diamond/glass and stuff, but this one's rather nice. 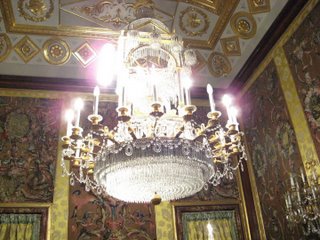 They also had really old instruments and stuff. The guide probably said more about them, but I wasn't paying much attention, I was looking at the instruments. And looking for the bassoon, which they didn't have. That was quite dissapointing. But, such is life. Bassoons are too cool for Madrid anyways. There were lots of strings, a guitar or two, and a couple harps. 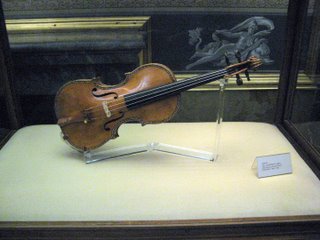 So, when we left the Palace, there were these two buskers outside, which, being music geeks, we loved. So we clapped for them and took their picture...of course. =) 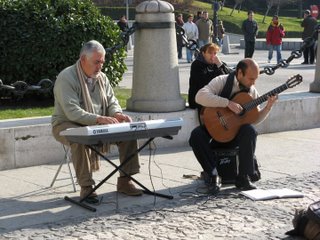 So there's our tour of Madrid Palace in a nutshell. I'm sure to get more pictures, right now I'm just using the pictures that I have from Bill (a chaperone) that he posted online. I still have to get Alicia's, Jasmine's, Christine's, etc. I think people are talking about getting a website thing where we can share all our pictures. So that'll be cool.

Well, that's a pretty long post for one night. Or rather, the pictures make it look long. Anyways, I need to get english homework done, because I'm already in trouble, and from the looks of things, I should start getting ready for a long night tomorrow if I intend to get a good mark on this.

"When I'm in the best music university in the world, and you're still at Aberhart, you'll be saying, 'oh, if only I'd worked on my ear training!'"
As said by Calminaiel at approx. 7:57 PM

Heh, you think YOURS looked long, my dad hasn't even read my entire Eragon post yet!

Anyway, I suppose there wasn't a piano either? *annoyed look* I love big old pianos...