Stupid hockey. Stupid Flames goalie. But the team looked like they were trying, which makes it slightly better. But not much. I hate the Flames. 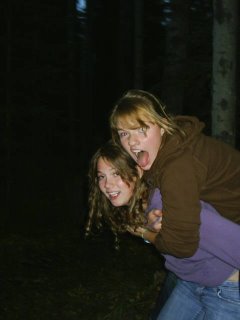 That's Brittany and Lindsay. What they're doing...I'm not quite sure. But Lindsay looks beautiful, wouldn't you agree? Brittany looks pretty in basically every picture she's in.

I had a pretty lazy day. Probably played a total of 2 1/2 hours of DS...give or take. Probably give. I did go out and walk the dog with Graham. We got slurpees, even though it was cold outside. Supid wind. I don't like wind.

I should have practiced bassoon, but I really didn't feel like it...so I didn't. I'll have to practice tomorrow though. I have so many things to do for my grade 8, I really have to start practicing more. Especially working on my high notes.

I did practice piano though, so that's good. I like playing piano, and I don't get to do it much during the week, since I'm so busy. I worked on my Starburst wrapper chain. =) It's pretty. I like it.

And yet, I'm still really tired. Which is weird, seeing as I did next to nothing today. Oh well. Me and dad are planning to make salsa tomorrow. Which is good, because I think my salsa is the only reason I ever get invited to surprise parties. =)

My brother's having a friend over tomorrow. A girl. I know I shouldn't think that's too weird...my brother's always had a lot of girls as friends...but...he's my little brother...anyways, moving on...

I get to sleep in tomorrow again. =)