U of C Wind Ensemble

I went to a U of C Wind Ensemble concert tonight. It was so amazing. With the contrabassoon, and tuba mutes (which are huge, and hilarious). It was so great. Andrea, Ry, Alistair, and Duncan also showed up, along with Christyne (french horn) and apparently a bunch of people from stampede band. I knew a lot of the people in the Wind Ensemble and symphonic band, which was really cool. I bought two CDs there. So that's good.

I also finished my reed today. It's so pretty, I love it. My teacher will probably tell me ten thousand ways to do it better, and then tell me to make another one, but I still love this one. And I like Kelskie's choice of nail polish colour for my first reed. =)

I also started writing the band camp soap opera today. It's gonna be pretty awesome. I'm looking forward to it, although I have no idea when I'll find the time to do it. I also need to work on calm, and finish all those songs I want to arrange. 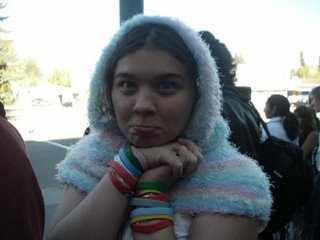 Yeah, that's me. That was just before we got on the buses to go to band camp. I really like that scarf...I got it in Colorado. =)

Hm...I have to remember to try that other tenor that Paddock found and see if I like it better. And I also have to check bus times to see if I can take the bus to my bassoon lesson instead of walking...I'll do that right after this.