Alright, I think I'm almost recovered from band camp. I'm still dead tired at times, and getting up in the morning is awful, but what else can be expected during the school year?

Nobody has sent me any band camp pictures, which sucks. But I got a bunch of Chloe's pictures off her photobucket, so that's good. I'll post them here. Not all at once of course, that would take forever. But I'll post a couple every once in a while. 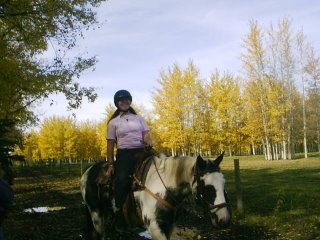 Band camp picture for tonight: Me, horseback riding. It's not a great picture of me, but right now it's the only one I have. So there you go. I loved my horse. She was so sweet. When you scratch her forehead, her eyes kinda half-close and she just stands still. She's adorable. Her name's Missy. They sold Cowboy (the horse I had last year), to a pasture where he can just graze all day. But he was 27 years old, so...

Oilers totally beat the Flames tonight! It was so fun. I'm so happy that hockey's back. It was very exciting. =)

Choir was fun today. I'm singing tenor for In Remembrance. Which is cool, because it's tenor, but that was the only piece where I knew the alto line almost perfectly and I could always get the notes. So now I have to learn it all over again. But that's alright. I just have to make sure I don't accidentally start singing alto again. So that'll be fun.

I should have done some homework tonight...but I didn't. So...too bad.

Bassoon lesson tomorrow, and I hardly practiced...lovely...but hopefully she's clip my reed so it's not flat anymore...

THERE you are! What did you do, lose your computer for the last week or so?! I was getting worried! Post more pictures :)