Honour band is fun. I'm excited. Especially tomorrow, when we have pretty much a full day of rehearsals. It'll be awesome. I like our music. Well, some of the slow stuff isn't so great, but I'm not really a fan of slow pieces. It has to be really super pretty for me to like it. No super great bassoon parts. Solo-wise. But it is fun music. And it's a fun group. Our conductor's cool too.

I got two new bracelets today. =) The Navy Band came today to play for our school, and they brought promo stuff. At least, that's what I call it. So I got a Navy Marine bracelet and an Army bracelet. I like them. That made me happy.

Social test made me less happy, but at least it's done and I don't have to worry about it anymore. At least until Wednesday, when we have our next test, but I'll worry about that after Honour band. 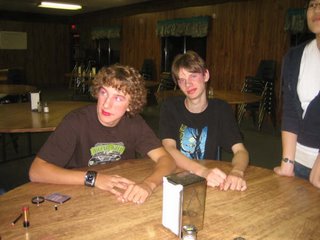 That's Seth and Alex with make up. It was one of the things in the scagenver hunt. I really wish I had a better picture of Josh with make up, because he actually looks really pretty. It's funny.

Hm...now I have to attempt to finish some laundry before bed...