When I typed the title, I realized that word reminds me of both 'unicorn' and 'onion'.

But to other things.

That way, when people try to complain, or blame you for something which is A) not your fault, or B) out of your control, you can just step back and say "I'm sorry, but my union doesn't permit me to try to help people like you." However, you may then pass them a list of numbers to refer them to somebody who specializes in psychology, and tell them they may find help there.

Also, people who need to have their food or coffee exactly a certain way should not go to fast food places. While I was standing in line at Wendy's, I overheard somebody explaining how they wanted a burger, but with no meat or pickles. Then there was a woman who had three different coupons, requested specific toppings for her burger, and then wanted fries with no salt. For the sake of the girl working the till, I'm glad a new batch of fries had just come out of the fryer, and nobody had salted them yet.

But this woman wasn't done. She then proceeded to explain to the girl how to enter in the coupons, and how to use her gift card (oh yeah, she had one of those too). I felt bad for the girl, cause she seemed new-ish, and she had to keep getting her supervisor to ask him a question.

However, I had to admire her, because she never once showed that she was frustrated, or gave any indication that their request was stupid (which I was thinking the entire time). She was very nice. And when I sat down and realized I had a beef burger instead of the chicken burger I had ordered, I just ate it anyways. Cause she'd been through enough, and to be honest, I'd been debating between beef and chicken anyways.

I have to agree with Ken. Everybody should have to work a customer service job for at least a little while in their life. It would probably make the world a better place. 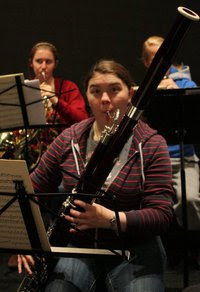 And just to end things off, a silly picture of me and my bassoon, clearly making beautiful music together. Or just in Banff, warming up for a rehearsal. However you'd like to interpret that.

"Just remember, everybody is special, and everybody needs to be treated like they're 'special'."
As said by Calminaiel at approx. 10:20 PM