Shot in the face

Don't think too much of the title. I'm watching Graham and his friend Wayne play risk, and I was struggling for a title. Which is when I generally just pick an easy line that I hear and use it. Voila.

And I've been meaning to do this for a while, but I haven't been in the mood lately.

1. Go to where you store your digital photo folders. Open the fourth folder.
2. Go to the fourth picture and post it.
3. Explain the photo
4. Tag four people. 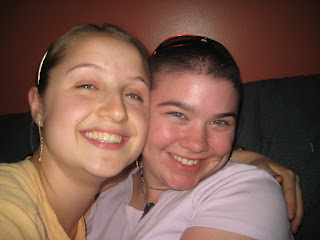 This is me and Elena at some sort of backyard party I was having. She found the camera, and did what Elena does, and takes lots of fabulous picture, this being one of them. This was after I shaved my head, thus the insanely short hair. I don't think this is the best picture of me, but at the same time, it's a picture including me, and a friend, and I always tend to love any picture of that nature.

I would have tagged Chloe and Rae, but I figured if I could tag people who haven't actually done it yet, I probably should. =P

Honestly, a lot of thinking has been going on these past few days. Not all of it good. The worst day had to be Tuesday night / Wednesday morning. But then that afternoon I sat down with my bassoon, and even after warming up, I was already feeling better. I love how practicing can just make me forget everything and keep my mind inside a practice room and on a task. It's a good feeling.

Of course, that can turn around, because there are times when life is so crazy that I can't make myself sit down and practice, because life is so insane that I can't focus and everything just goes downhill. But that's for another time.

Generally I hide out in my room while my brother has a friend over. But I like Wayne, and I clearly don't feel like hiding in my room right now. Thus, here I am.

Me and Mom had a nice night out. We talked about a bunch of stuff, which was good. I don't really talk to my Mom enough. Mostly because I'm only sometimes in the mood, which is my own fault. But still, it was fun. I wouldn't mind doing it more often.

On another note, I really need to find that balance between studying and practicing. It's a fine balance, and I clearly haven't found it yet, because I'm either feeling really good about my lessons, or really good about my classes, but never both. Sometimes neither, but that's another story.

Well, the thought of this weekend will probably get me through tomorrow. As well as Laser Tag in the evening. That'll take a lot of the week's worries away. Especially if we go for "beverages" after.

"I think it's a fantastic idea. In fact, all of you should commission me to write pieces for birthdays."
As said by Calminaiel at approx. 11:14 PM

That is an awesome pic!

You did commission that opera we were talking about for your party right??