I've slept for 12 hours the last two nights. I love it so much. I woke up at 1:00 in the afternoon today, which I haven't done in a while. It was actually quite a surprise for me when I rolled over and looked at the clock. But it was also a pleasant surprise, because sleep is healthy, and I haven't had a lot of it in the past week. So that's good.

So, that's why I haven't posted for a while. I've been way too tired, so I've actually gone to bed fairly early, and I've woken up late.

Other then that there's not really much to say. I'm enjoying my time off school. I haven't done much yet, but eventually I'll have to clean up the area around the piano, and clean my room, or my mom says I'm not allowed to go to Radium. I'm thinking I'll do that when I have the house to myself, because then I can put on music while I do it. I just have to make sure I don't get too caught up with playing piano, since I'm really looking forward to having time to do that.

I've gotten really far on Golden Sun, since I've been playing video games a lot these past two days. But now I'm at a part where you have to do a lot of sneaking around without being spotted by the guards, and I'm never good at those parts. I'm also not patient enough for it, so I'm considering just skipping that part. Technically I don't think I have to do it, even though Graham told me it helps a lot.

I played Super Smash Bros. Melee with Graham and his friend Sarah the other day. I only one, like, 3 times. All the others I came in second. It's really disgraceful, I was very disappointed with myself. I should work on that this week...

I e-mailed Alicia, inviting her to technique class tomorrow. I really hope she comes, because Francesca said we could play duets if she does. Speaking of technique class, I have to be sure I practice before that, because I know I won't practice after. I also have to organize my chamber music, since it's pretty much a disaster right now.

I really hope I have a good practice sometime from now to my next lesson. My practices have all been so-so, and my tone totally goes out the window somewhere between my warm-ups and the first song I do. So...not good. My reed might be part of the problem, although I don't want to blame it on that. I really need to start working on more reeds. Francesca's getting fed up with selling me more reeds, and she says I should be working on my own by now. So...I should start doing that, because if I don't have functional reeds, I'm in trouble.

Alright, I guess it's time for a Spain story. As a side note, I found out if you click on the pictures, they get bigger. Who knew? Anyways...

We went to Toledo after Madrid. I love Toledo. It's so adorable. When we were just driving in there was this neat castle. I honestly can't remember how far it dates back to, but it's very old. I really liked it, even though we just saw it from the road. I'm not even sure if I had my glasses on, although I think I did. 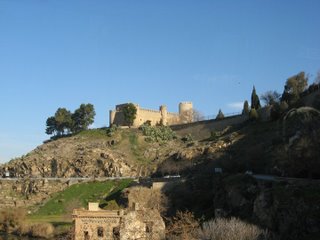 The busses stopped so we could get out and have this awesome view of Toledo. Apparently it's a really famous view, painters use it a lot and stuff. I love how, from that point, you pretty much can't see any roads. Not that the roads are big, they're teeny. The biggest one can't really fit more then our tour bus. Anyways, from there you can see the cathedral, which is the big tower on the left. Um...I'm not sure I can really tell you anything else about that. The cathedral's really the only part that I recognize. I know one of my CYO buddies are probably going to read this and slap me for missing something obvious or something, but I'll let them do that. 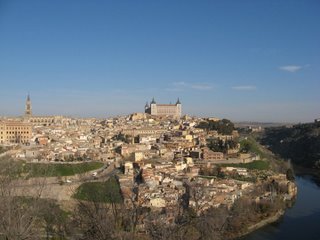 Then of course, we had to get pictures of everybody in front of Toledo. Here's the two clarinet boys, and some violin guy. After that, there's the Cox family...minus Sebastian. 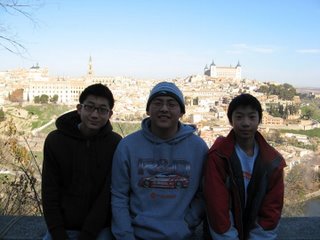 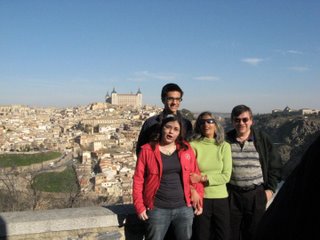 So, after that, we went to some cool factories where they make swords. Well, and other things, but we were all interested in the swords. Apparently the water in Toledo has special minerals, so when they dip the swords into them then it makes them very flexible, so they bend more, but don't break. Or something like that. It was pretty cool. 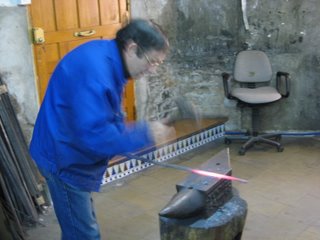 After we saw that, we got to go down to the store and actually buy swords. =) Which I did. I'll get a picture of mine and post it here, but until then, here's one of the displays they had set up. I think they had at least three others like this one. 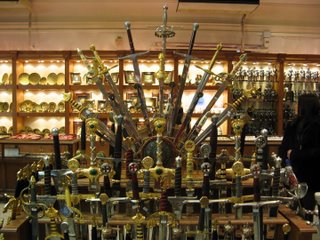 During our tour of Toledo we saw building...such as this one...sorry I don't have a better story for this picture... 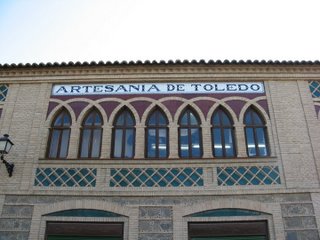 And, in my opinion one of the highlights of Toledo, we got to have a tour of the cathedral. I love it, it's so pretty. Here's a shot from the outside...I believe these are the front gates of the cathedral, which aren't actually used except for very special occasions. There's also the same shot with the guys...um...being guys... 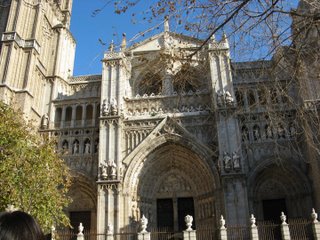 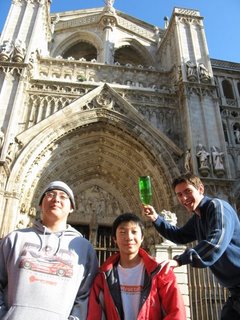 I believe we saw four organs in that cathedral. Here's one of them. As of right now, that's the only picture I have of the inside of the cathedral, and I really hope I get more, because it was so neat. 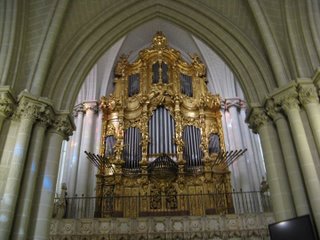 Here's another view of Toledo, that's apparently kindas famous. The bridge, anyways. I think we saw a couple more shots of the bridge that were better then that, but here's one until I get a better picture. I also liked the view of the cactuses...mainly I think because I don't usually see cactuses outside of the zoo...=)...Or cacti, whatever... 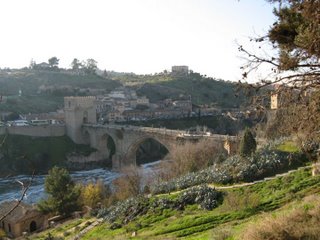 We played a Mozart piano concerto in Toledo with a guest soloist, which was cool, I guess. I wasn't playing in the Mozart, so. However, I did accomplish something while they were rehearsing. I found out I was able to sit in one of the chairs in the audience, and fall asleep without dropping my bassoon. I normally wouldn't have tried that while completely conscious, but I was quite tired, and I had my bassoon in a fairly secure position...my ankle was hooked around the bottom of it so it wouldn't slip, it was between my knees, and my hands were there for extra support...or rather, one of my hands were. I was sleeping on the other one. Besides, Alicia was beside me, and I figured that if my bassoon was falling and I wasn't doing anything about it, she would. At least, I hope she would. =) By the way, she just e-mailed me and said she's coming to technique class tomorrow. I'm excited. Duets! 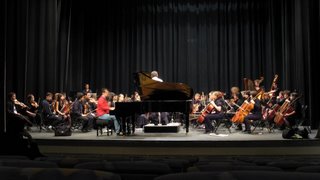 Oh, during that rehearsal (not during the Mozart, so I was there for this part), Agopian wanted to go to the back to see what it sounded like from there, so he handed the baton to our concert master and she started to conduct while he was gone. I don't know about anybody else, but I thought that was hilarious. But I think a lot of stupid little things are hilarious. 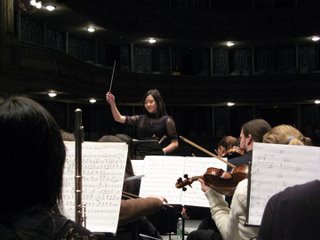 And, finally, here's a shot of one of the clarinet guys (Jasmine's brother...I can never remember his name) with a sword. They were in practically every shop, so it's not like they were hard to find. 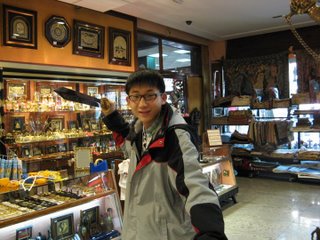 Now I'll face the decision of staying up, or going to bed...everybody else has gone to bed, but I don't have to get up tomorrow or anything...but I also have nothing I have to do on the computer, and nobody's really talking to me. Meh. maybe I'll stay up a little longer, listen to music, play games, all that good stuff, then go to bed. =)