In the Middle of Nowhere

I've concluded that is where my house is. In the middle of nowhere. At least when it concerns rides and such. I seem to live in some far off little corner not even close to anybody else, meaning if I can't get a ride somewhere, I'm in trouble. Which is what I'm in right now. I either don't go to ensemble rehearsal, or I take, like, a 2 hour bus ride to get there...talking about 3 different busses. Not exactly an appealing thought. And I hate thinking that I'd rather just not go, because I've bugged everybody else about being committed to this, and making sure to find ways to make time for rehearsals and so on. And now I'm not even willing to sacrifice the time it takes to catch a couple busses down there. So, I'm still not sure what I'm going to do about tomorrow.

On top of that, I really need to practice my NYB pieces, or I'm going to be in a lot of trouble...

Anyways, I forgot my music bag for sectionals today, which really made me mad. But sectionals went well, so that's alright. I basically slacked off for the rest of the day. Not a great decision, but it did feel kinda nice.

That's all for now, I guess. It really doesn't feel that late, although it is almost 9:30...I kinda feel like going downstairs to play video games...but I never play video games this late...=P 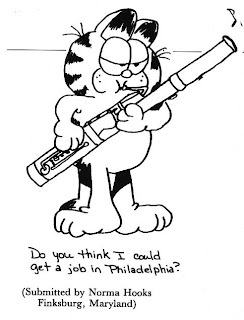 "If you and the bassoon were trapped in a burning building...I'd have to go for the bassoon..."
As said by Calminaiel at approx. 9:08 PM

I'm slightly relieved that I'm not the only one who forgets my music. Loving the Garfield :)