Where to start...it feels like I did a lot today. Probably just because I haven't done anything for the past couple days. Anyways.
My mom woke me up so me and my brother could go get our passports. She said it was going to take a while, waiting in line and stuff, but we had hardly even walked in the door when it was our turn to go up to the desk. So we were actually out of the passport office about a half hour after we walked in. Which was nice, really.
Then we went to Wal-Mart to print pictures from my grandparents anniversary. I had a couple friends at that anniversary, because they've formed their own jazz band and they came to play during the party. So we had a lot of pictures of them. We printed two sets of the band pictures, so we could give one to the band. We also printed one set of all the pictures we took during the weekend. After that we looked at thank you cards that we could give to them too, but mom didn't find anything she liked there.
Then we got to go to Pelican Pier for lunch. It's a really nice seafood place. So that was a lot of fun.
We went home for a little bit, and then had to leave again because I had to go get my eyes checked. So, after many fun tests (including, "Now let's try the left eye...can you see these letters?" "Nope,") I got a prescription. I don't have to wear glasses all the time...just for distance stuff. Anyways, we went next door to Lenscrafters and spent a little while (meaning, a long while) looking at frames. I finally picked these really nice thin-framed purple-y ones. Since it was a slow day, and she said it would only take about 45 minutes for them to finish my glasses, me and my mom hung around the mall until they were done. We went to Wal-Mart and bought some back to school stuff (but no new pajamas...she said I could get those when I go to band camp). We also went to Hallmark to look at more thank you cards. We found one I liked so much, I bought one just for myself. On the front it had a staff and a note on it (and, for the people who care, it was in treble cleff, in F major, and the note was an A) and it said, 'just a note' and then on the inside it said '...to say thank you'. It's so adorable.
So we got that, and then just wandered around for a while, before going to get my glasses. I can see now! It's pretty great.
And...yeah. Then we just dropped the pictures and the card off with one of the band members...and headed home. Had Subway for supper. =) I love Subway. And watched the last half of 'A Knight's Tale'. I guess I didn't really do that much, but it kinda feels like it.
So...I guess I promised bracelet pictures, didn't I? Alright...I split them up a little bit.

Those are really only bracelets I made from scrap thread. Threads that weren't long enough to make a real bracelet, so I call them keychains. That's why they look kinda odd... 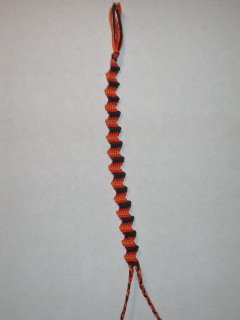 That's the other zig-zag one I finished a while back. It's the first half-decent zig-zag bracelet I've done in a while. 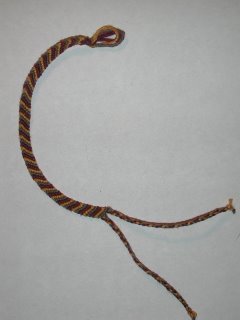 And that's the earthy one I just finished. Yeah, the straight bracelet's always curve like that, but once you put them on, you can't notice anyways. I post a picture of the one I'm working on when I finish it, although I don't think I'm even half done yet.
As said by Calminaiel at approx. 12:33 AM