I love Fridays. Today was a good day.

Band camp picture of the day... 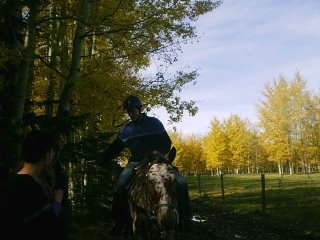 That's Adam on his horse. I loved his horse. He kept trying to eat, so Adam had to keep pulling his head up. It was quite amusing. But he was a sweet horse, I liked him.

Anyways, I worked a little on the piece I'm arranging. It's May It Be, from the Fellowship of the Ring. For flute, two clarinets and bassoon. The band room was a happy place this morning. It was Kathleen's birthday. Happy birthday, Kathleen. We ha cake. And balloons. And Miranda smacked Andrea's eye trying to hit a balloon. Now Andrea has a lovely green and blue brused eye. It's beautiful. Although I'm still trying to convince everybody that she's in a long-distance abusive relationship with Bryan.

Since I learned the piano part to one of our choir songs, Kate came over to the piano, and I played while she sang. She has a lovely voice. It's amazing. A bunch of other people joined in, which was fun. Then we had choral, which was even more fun.

I've almost finished my story in english. I kinda like the way it's turning out. I've started over a couple times now. But I think I've found a way that works. I want to get it done for Tuesday.

My lesson even went well, even though I only practiced twice in the past two weeks. All Cities was so great. But it usually is. I love All Cities.

Then Ry, Andrea, Alistair, Josh and I went out for dinner to celebrate the fact that Ry's away from Co-op. Hopefully he has his soul back after tonight. We got sushi. It was cool.

Oh, and today is officially Take-Out Andrea day. Everybody seemed to be doing something to Andrea today. Brusing her. Bumping into her. All that jazz. So, yes.

And I get to sleep this weekend! No practices, no school on Monday. It'll be so nice to be able to sleep again...