It's funny. You wouldn't think sitting down the whole day would really make you that tired. But rehearsals are exhausting, especially three of them in a day. I know it's not like all we're doing is sitting...we're not just sitting around being bored, or sleeping or something. But still, it's not like we're running around and stuff.

Anyways, honour band is really fun, as long as my mouth doesn't give out on me. I think I already mentioned a bunch about honour band in my last post...but, I like it. I got hot apple cider from Second Cup when we went for dinner. I love apple cider. I need to tell my dad to buy some. And I love the cinnamon stick that Second Cup throws in it too. =)

So, Andrea said that audtions for the National Youth Band have to be in by November 15th. Which means I basically have to cram, make a recording, and send it off sometime in the next two weeks, seeing as I'm leaving for Mexico on the 6th. So that'll be interesting. It shouldn't be too bad. It's not a live audition, so it'll be less stressful. And I know my Hindemith pretty well. I don't know if I should play another piece...it says two contrasting pieces, but the Hindemith has two contrasting movements, and in the second movement it pretty much has three contrasting sections. So I think that should be enough. Plus, they said we should keep it to about 5 minutes, and I think my Hindemith already goes over that, without even including my scales and stuff.

It also kinda overlaps with our trip to New York with Symphonic Band at Abe. Me and Andrea are going to talk to Paddock (that is, assuming we even get in. We're kinda jumping ahead of ourselves here). 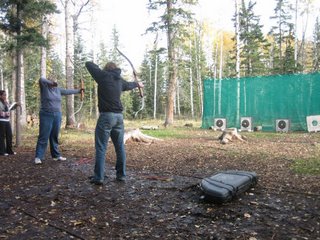 That is (apparently) the archery thing at band camp. I've never been there, so this was my first time even seeing the place. Looks fun. I still like horses more. =)