Lately it seems like people just love starting msn convos with me. I used to never chat on msn, and lately I've hardly ever had less then 3 convos going at once. Of course, it doesn't help me finish homework, and this blog post is certainly taking longer then it would if I wasn't chatting, but still. It's fun. I actually have friends. =) As if I didn't already know that. Anybody who sticks around with me when my bad mood lasts for two months can't be anything but a very very good friend.

I'm also thinking I kinda like somebody now. But I have no idea if he likes me. Most likely, he just thinks I'm super weird. Not that I'm not super weird, but I'm really not that bad once you get to know me. My first impressions are just a little misleading at times...plus, I found out that one of my friends also kinda likes him...so...anyways, better stop before I say too much here. =)

I should start writing my life in soap-opera form here. Just for Paul. He said on msn the other night that my life is such a soap opera. I tell him a bunch of stuff, and apparently he finds it quite amusing all the stuff that goes on. Then I could even warp my life entirely out of proportion...which is actually an interesting thought...

Speaking of soap operas, I've been meaning to write a soap opera on theory. Yeah, it sounds weird, but our teacher always talks about I chords and V chords getting along, and being the thing that holds the universe together, and how the bass and soprano are flirting, while the tenor's a showoff and the alto's oblivious. I also think it would actually help me remember theory. Anyways, that's providing I actually have the time for it, which I don't really. But we do have a couple of days off coming up, so we'll see...

And I'm getting better! I was actually able to stay in the same room as them for about 45 minutes before really feeling the need to leave. That's a good sign, right Keslkie? And I'm not always as bitter as I was this morning...there are just moments where I see them and...well, you know.

I keep forgetting I have orchestra tomorrow morning. Which is lovely, I love orchestra. But, truth be told, I would love it more if it weren't in the morning.

*hugs* for Sarah! Everything will be alright with you, and it'll work out with me too, so we'll both be where we want to be eventually, right?

Same for you, Kate. Don't ever think you're wasting your time. We all 'waste our time' in some way or another, but in the end, it's always for the better. Just keep moving on, and what'll happen, will happen. And when in doubt, take my own personal therapy session...sugar in some form (candy, chocolate, etc.), great music, and a good rant. How do you think I've made it through these months?

"Did you know male gerbills mate 12 times in one night and then die of exhaustion?" 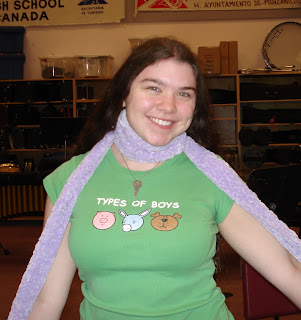 As said by Calminaiel at approx. 9:45 PM

yes it's a good sign. That means lots of thigns but it's good and that means you can also stay where you belong in the band room. if you suddenly didn't go there anymore no one would ever be able to find you.

hehe but yes yay for updates.. I'll go publish the draft of the story I re-typed a few days ago... now I never actally published it oops... :)