Alright, Randall has requested that I talk about the Rascal Flatts concert, so I suppose I should do that. =)

In a nutshell, it was pretty awesome. Being the band geek that I am, I just happened to notice the awesome drum duet they had (which was actually really cool, no matter if you're into that or not), the amazing fiddle, and such on. Also, I could help but notice that the one guy could play probably every single instrument.

I cried over 3 songs. Which is weird, seeing as I usually don't cry over songs unless it's a really amazing song, with a really amazing music video to go with it. I believe I cried over 'What Hurts the Most', 'Sarahbeth' and...'God Bless the Broken Road', I believe...although I have a feeling it wasn't that song, it was another one...Randall, correct me if you know...

Anyways, it was indeed super awesome. They put on an amazing show, and they also seemed to know exactly what songs to play after the ones that made me cry, which was a nice touch.

I surprised Randall with Meet and Greet tickets at the concert that my dad was able to get last minute. She seemed to like them. =) And here's the awesome picture we got out of the deal. 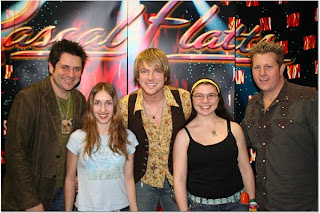 Hm...not dressed entirely conservative there, am I...

So, not much else to say, I don't think. The honor band concert was awesome, so that's good. I have homework that I'm probably not going to finish, so that sucks. Yipee.

Aidan is hilarious. He really is. I think we'll keep him. =) Henry's just getting scary, and Shayne's not helping much.

And such are my vague, mostly unrelated comments of the day.

"Yeah, well, we can't wear guys' shirts, since we happen to have something that you don't have."
As said by Calminaiel at approx. 10:35 PM

The quote at the end made me laugh the most :) I shall have to try and do that, my friends say the funniest things.